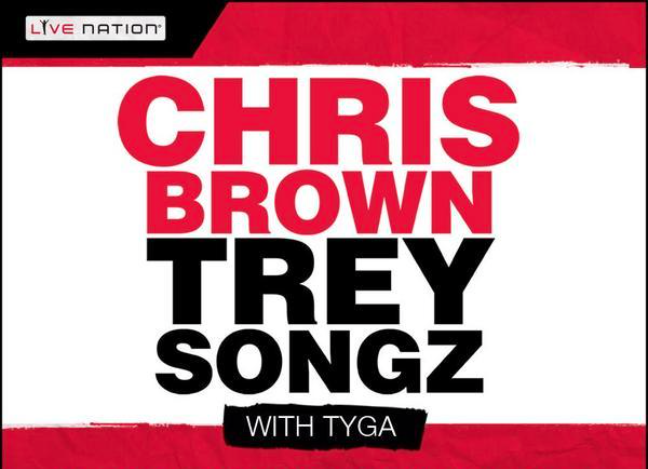 The BETWEEN THE SHEETS TOUR featuring Chris Brown with Trey Songz and special guest Tyga has set an all new kick off date. The tour will now start on Thursday, Feb. 12 in Sunrise, FL at BB&T Center.  Chris Brown, Trey Songz and Tyga all want to assure their fans that the BETWEEN THE SHEETS TOUR is still happening and they are bringing one of 2015’s hottest tours to the road this Thursday!

“I’m excited to tour North America with my brothers Trey & Tyga,” says Chris Brown. “To the fans who have been with me since day one… The BTS Tour is dedicated to your loyalty!”

Multi-platinum selling artists Chris Brown and Trey Songz announce their upcoming BETWEEN THE SHEETS TOUR kicking off in 2015. The tour was announced today at the House of Blues on Sunset Boulevard in front of a packed house of fans and people worldwide via a live stream who were treated to a special performance by the two mega-stars. Produced and promoted exclusively by Live Nation, the BETWEEN THE SHEETS TOUR will take the two entertainment heavyweights to 25 cities across North America including a stop at Atlanta’s Philips Arena on February 3. Tyga will be a special guest on the tour.  A full list of tour dates is below.

Grammy award-winning singer/songwriter Chris Brown recently made his sixth #1 album entry on the Billboard R&B/Hip-Hop chart with his latest release X (RCAS Records).  The album also debuted at #2 on Billboard’s Top Albums chart, marking his sixth album debut within the Top Ten.  X sold over 140,000 units in its first week while Spotify streams of the album continue to rise. With his incredible national television debut performance of the album’s title track on The Tonight Show with Jimmy Fallon and recent much-buzzed about performance of “New Flame” with Usher at the iHeart Music Festival, combined with the ongoing chart-topping success of “Loyal,” there’s no question why the talented Chris remains a mainstay at top of the charts.

His latest album, Trigga, debuted at #1 on the U.S. Billboard 200 album chart and is the sixth studio album by the Grammy-nominated entertainer/artist known as Trey Songz. The album was released on July 1, 2014, by Songbook and Atlantic Records. Following the release of his fifth studio album Chapter V (2012), which also debuted #1, Songz made his acting debut in Texas Chainsaw 3D and Baggage Claim in (2013). The same year Songz began work on his sixth studio album collaborating with artists including Nicki Minaj, Mila J, Ty Dolla $ign, Justin Bieber, and Juicy J.

BETWEEN THE SHEETS TOUR

All dates and venues below subject to change.