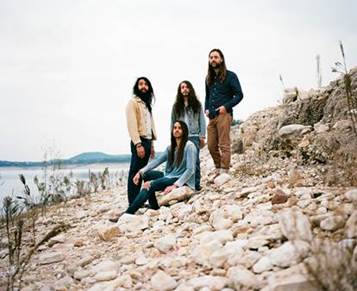 The Bright Light Social Hour started their North American tour in March and will be in Atlanta at The Earl on April 7th.

Austin psychedelic rock outfit The Bright Light Social Hour released their sophomore album, Space Is Still the Place on March 10, 2015 via Frenchkiss Records. The 10-track collection was written, performed, produced and engineered by the band at their home studio in Austin, TX, and mixed by Chris Coady.

The Bright Light Social Hour convened while Curtis Roush and Jack O’Brien attended graduate school together at the University of Texas in Austin. Following graduation, they released their first self-titled LP in 2010. In the months and years that followed, their songs won over their hometown, and they scored six awards at the SXSW 2011 Austin Music Awards.

Space is Still the Place encompasses the idea of a “Future South,” which was developed by the band after touring across the country, heavily in the South, over the last few years. While on the road, the band usually stayed with people in various cities instead of hotels and gained a new perspective on the struggle young Americans faced after experiencing it first-hand.

Our music contributors have a healthy habit of checking out major headliners just to catch the openers. We can definitely see them opening for a major tour/festival in the future. They have a very nice sound and we think you guys will like them 😉 Check them out at The Earl tomorrow April 7th TICKETS Have a listen below: