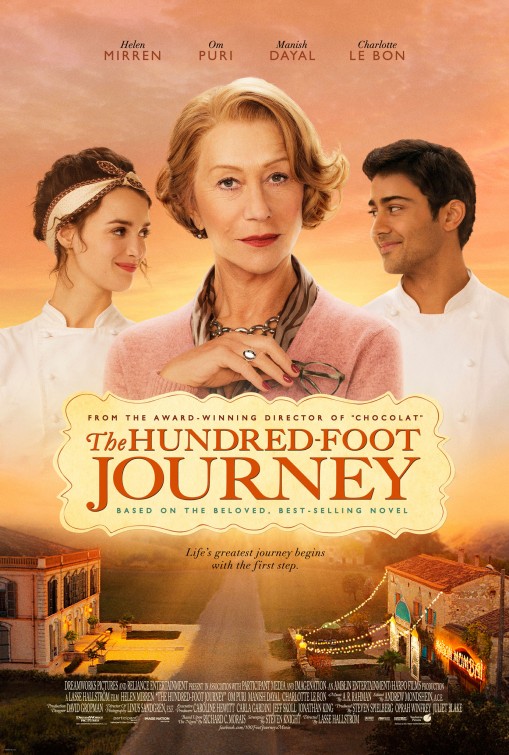 The Hundred-Foot Journey, directed by  Lasse Hallström, was a fantastic film! It begins with the family of talented cook, Hassan Kadam (Manish Dayal), whose life is filled with both culinary delights and profound loss. Hassan and his family flee to Europe after facing political violence in India (that also took his mother’s life). His family’s escape eventually landed them in France. Whilst traveling through France their car breaks down. As fate would have it, they come across the kindness of a young woman named Marguerite (Charlotte Le Bon). In her village, Saint-Antonin-Noble-Val, Papa Kadam (Om Puri) gets inspired to set up an Indian restaurant there.

This new plan to stay in the village and conjure a host for Indian cuisine wasn’t immediately accepted by the family and definitely came to the chagrin of nearby restaurant owner Madame Mallory (Helen Mirren). The film tells a heartwarming and very real story of love, loss, racism, acceptance, and new beginnings.

The Hundred-Foot Journey is a wonderful story that will keep you intrigued and not looking at your watch. It runs right at 2 hours long and you should definitely give it a try this weekend. Great story, great dialogue, and it has Helen Mirren in it. Need we say more? 9 out of 10.