Atlanta United today announced it has signed midfielder Miguel Almirón to a multi-year contract as a Young Designated Player. Almirón, a 22-year-old Paraguayan international, was acquired from Club Lanus of the Argentine Primera Division via transfer.

“Our club’s ambition is to acquire quality players heading into their peak playing years and Miguel’s youth and ability absolutely speak to that,” Atlanta United President Darren Eales said. “He’s highly regarded as one of the top young players in South America and we couldn’t be happier that he has chosen to continue his already impressive career here in Atlanta.”

Known as an attacking midfielder, capable of playing either centrally or wide, Almirón has risen to prominence since making his national team debut in September of 2015. Since then, Almirón has been a fixture in Paraguay’s National Team camp, making six combined appearances in 2018 FIFA World Cup Qualifying and the 2016 Copa America Centenario. He made his first start in Paraguay’s current World Cup campaign against Argentina on Oct. 11, where he helped lead La Albirroja to a 1-0 win and a crucial three points to trim Paraguay’s deficit in the CONMEBOL table – which currently stands four points behind the fifth and final qualifying spot held by Argentina.

“Miguel is a player I’ve long admired,” Atlanta United head coach Gerardo “Tata” Martino said. “He is a very skillful player with excellent technique and great vision. He is currently one of the best players in Argentina’s top league and we’re really excited that he’s joining Atlanta United.” 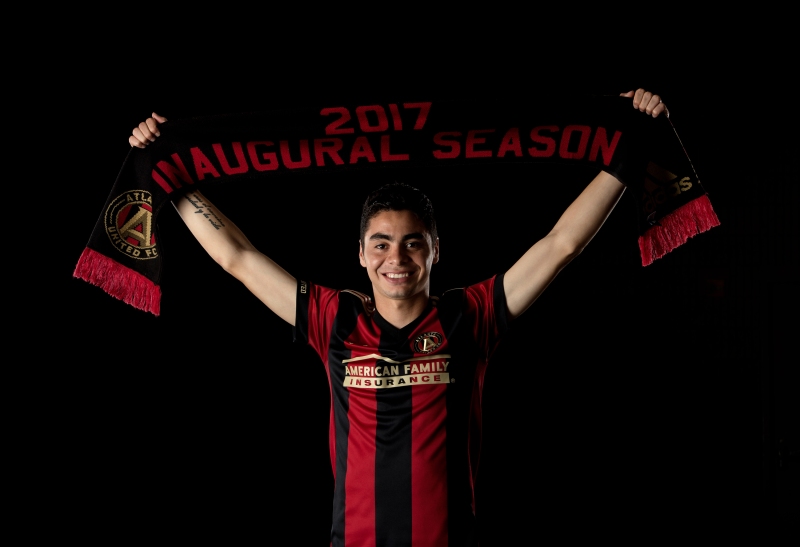 Almirón started his career with Paraguayan power Cerro Porteno, signing with the club at 14 years old. After spending time in the club’s youth academy and proving to be a mainstay for multiple Paraguay Youth National Teams, Almirón made his professional debut with Cerro Porteno on March 10, 2013. He appeared in 39 games during his three-year spell with Cerro Porteno’s First Team and registered a career-high five goals in just 19 games in 2015. He then transferred to Lanus in August.

“Miguel’s profile fits the exact type of player we were looking for in this attacking role,” Atlanta United technical director Carlos Bocanegra said. “Part of our scouting process was to ensure that he would be the right fit for our style of play and for our organization as a whole. His energy and ability to run at defenders with the ball at pace will be exciting for the fans to watch and gives us a key piece to build our team around.”

Almirón’s impact for Lanus was immediate, scoring his first-ever goal for the club against Belgrano in the second round of 2015 Copa Sudamericana, which helped guide the club into the knockout rounds. In, 2016 he led the club to two major championships, including just their second-ever Primera Division title during the shortened 2016 Primera Division campaign. During that season, Almirón appeared in 13 games and scored three goals to lead Lanus to the top of the table. They faced San Lorenzo in the final, where Almirón started and scored, leading Lanus to a 4-0 win over San Lorenzo, which featured current Atlanta United teammate Hector “Tito” Villalba. In August, Almirón led Lanus to their second championship of the calendar year during a 1-0 win over Racing Club in the 2016 Copa Bicentenario. During his career at Lanus, Almiron scored a total of four goals in 33 league matches and 10 cup matches. The upcoming MLS offseason will officially begin on Sunday, Dec. 11. The MLS Expansion Draft will be held Tuesday, Dec. 13 with Atlanta United and Minnesota United FC each selecting five players when the draft begins at 2 p.m. Later in the day, MLS Free Agency will begin at 5 p.m. The MLS Waiver Draft is scheduled for Thursday, Dec. 15 at 2 p.m. and the MLS Re-Entry Process will begin with Stage One on Friday, Dec. 16 at 3 p.m. and Stage Two to begin on Thursday, Dec. 22 at 3 p.m.

You can catch highlights of Miguel Almirón below. He’s #26