It was a hot and extremely humid Saturday evening that saw Atlanta United host the Colorado Rapids for their first ever meeting. It was a special evening for two reasons: First, United was at full strength for the first time at home in months. Second, we were able to see U.S. National Team legend Tim Howard in goal for the visitors.

Unlike their past matches this season, the Five Stripes didn’t come out the gates swinging. Instead of going 100mph from the jump, they were playing tight in the middle and not launching long balls out the back.

The first caution came in the 34′ when Colorado’s Dennis Castillo took a dangerous lunge at Carlos Carmona from behind, earning the team’s first yellow card.

Anton Walkes impressed all match finding open space along the right flank. But most importantly with the way things have gone this season, he always stayed in position (we continuously get exposed on counterattacks).

In extra time in the first half, United saw their first real chance from a Miguel Almirón free kick which was saved by Tim Howard. Another chance came in the 51′ when Martinez headed a ball that bounced off the pitch and over the crossbar.

United turned on the heat in the second half and the Colorado defense was starting to feel it. In the 57′ a beautiful 2 v 1 opportunity came about when Miguel ‘Miggy’ Almirón led a ball to Josef Martinez who took a chance in the penalty area but was blocked beautifully by Tim Howard. 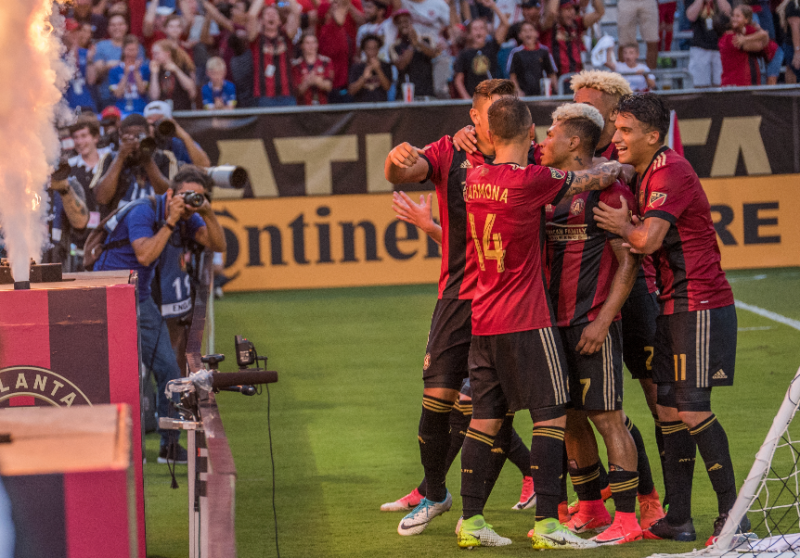 The battle between Howard and Martinez intensified when Josef attempted a bicycle kick that looked like a guaranteed goal but Howard somehow deflected it to himself and caught the ball. But in the 67′ Martinez finally had Howard’s number and nailed a deflected ball past the legendary keeper to take the lead. A scary moment came during the celebration when Martinez jumped over the commercial boards to jump on a box not knowing that flames would come out. Thankfully, everyone laughed it off and he immediately jumped back.

The last chance for Colorado to equalize came in stoppage time after the full ninety were completed. On a corner kick, Colorado managed to head the ball directly in front of Alec Kann. As the ball fell to the ground inches from the goal-line, Kann scooped it up before Rapids’ defender Eric Miller could tap it in.

“The clean sheet was a big step for us, it’s been a while since we’ve had one,” defender Michael Parkhurst said. “We feel like some games we’ve been good enough to get a clean sheet and it hasn’t happened for whatever reason and other games we have rightfully given goals and made some mistakes. To come out here in front of our home fans in a tough game where Colorado made it very difficult defensively, we knew that we had to be tight in the back. We knew it was probably going to be a one goal game.”

My Man of the Match goes to Josef Martinez for the lone goal to push United past the Rapids.