Today we had our first glimpse of England’s golden boy Wayne Rooney and we welcomed back Yamil Asad with open arms. There were a few changes in the lineup before the match. Ezequiel Barco was omitted from the starting XI, Chris McCann was back, and Andrew Carleton saw a rare start.

In the 8′, D.C. United’s Paul Arriola led a counterattack on a 3 v 2 and played a solid through ball to Zoltán Stieber who beat Brad Guzan for the game’s first goal. MLS-newcomer Wayne Rooney sent a quality long ball to Arriola to start the counter. I asked him how he was adjusting to D.C.’s style and MLS play in general. “I’m still getting fit, today’s my first start, so it was a difficult game,” said Rooney. “Atlanta played very well. They deserve the win. Although we had a good start, conceded some sloppy goals, but they deserve the 3 points.”

In the 29′, Josef Martinez collided with D.C. keeper David Ousted while competing for a header. Fortunately, he got good contact and he was able to even the score 1-1. Not only did Martinez come out of the collision unscathed (Ousted needed attention) but he outjumped the keeper as well.

Soon after, the local boy Andrew Carleton lofted a long cross to the far corner netting and found Josef Martinez for yet another header to take the lead 2-1. His hat-trick came in the 73′ after dribbling around D.C.’s keeper, breaking the MLS record. 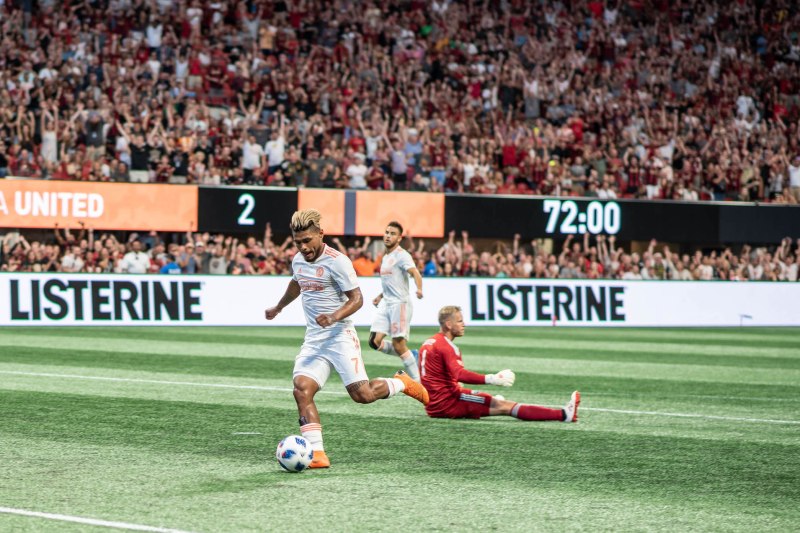 Afterward, we heard from Andrew Carleton on his start. “I feel like I could’ve done more,” said Andrew Carleton after the match. “But I’m still happy with how I did.” Surely it had to feel good being a part of history since he assisted Martinez’s hat-trick goal. “We had a corner kick and Miggy played it out to Franco and Franco played it to me. I was 1 v 1 and I take pride in being good at those one-on-one battles,” he said with a smile. “I was a little nervous on my left foot but I whipped it in and it ended up getting to Josef and Josef finishes like he always does.”

Atlanta United Manager Tata Martino informed us that we didn’t see Barco tonight because of a disciplinary issue so he was suspended today and will also miss the next match against Montreal.

My Man of the Match is the record breaker, Josef Martinez. After his first two goals, we had to think back to the last time he scored with his feet because headers have been his specialty as of late. He put forth all the effort today in attack and defense.

Atlanta will enjoy the day’s achievements and prepare for the Montreal Impact next Saturday, July 28. The following Wednesday, August 1 will be the MLS All-Star game where the best of the league will face Italian giants Juventus.