Big news everyone! Imagine will be expanding to four days, which will be accompanied by full music programming on the Disco Inferno stage, early arrival camping, and an extra day of fun. Taking place at Atlanta Motor Speedway this September 19-22, 2019, the added day will be free to everyone who purchases a 3-day ticket and available for a limited time until August 15th. Imagine has also unveiled the full lineup, in addition to several other big announcements, including a brand new stage- TechYes / Guerrilla 360 and a Saturday pool party!

The full lineup by stage:

In addition to music pulsing throughout the festival grounds and into camping, Imagine has partnered with Beatbox Beverages to host a Vegas-style daytime pool party on Saturday. All festival-goers are invited to the party and can add the pool party to their ticket. VIP campers will automatically have the pool party included as a part of their pass. DJs for the pool party will be announced in the coming weeks.

Finally, for those Imaginers looking to get a head start on the week, Imagine is opening up the camping grounds for early arrival on Thursday, September 19th. Early arrival camping passes can be purchased as a part of a 4-day combo pass or as an add-on for those who already purchased their camping passes for Friday through Sunday. 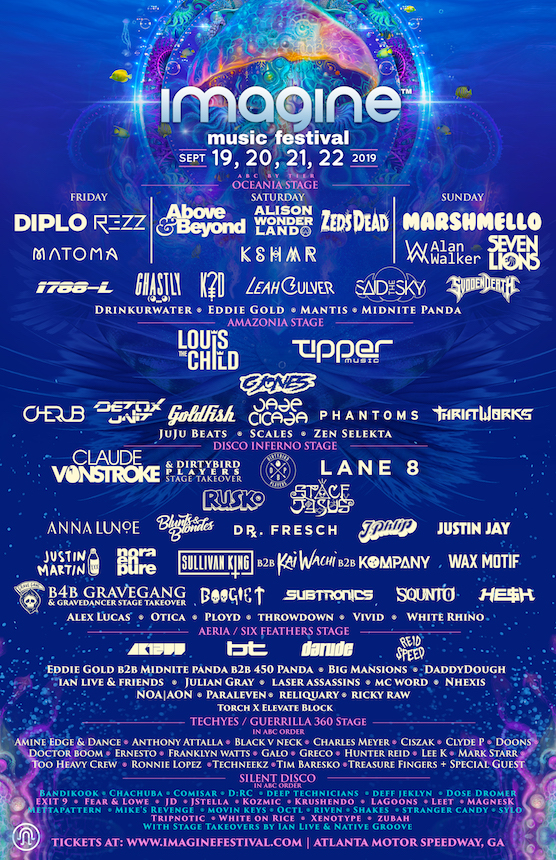 For a limited time, up until August 15th, 4-day General Admission passes are available starting at $269- the same price as a 3-day pass and $289 for a 4-day pass with Early Arrival GA camping. VIP passes with express entry into the festival, exclusive viewing areas, VIP bars, and lounges, and private air-conditioned VIP trailer restrooms start at $369 for a 4-day pass and $539 with a 4-day pass with camping. Payment plans are still available for a limited time. Tickets are available online at http://www.imaginefestival.com. Imagine Music Festival is an 18 and over event.