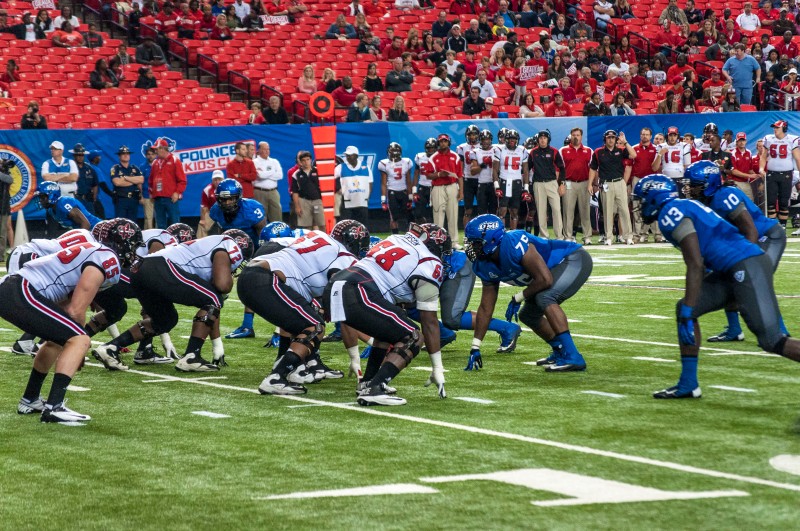 This past Saturday the Georgia State Panthers took on the University of Louisiana-Lafayette Ragin’ Cajuns. On the Cajuns first possession they weren’t able to make any progress, giving the ball to GSU on a punt. But on their second possession it took a mere 2 plays to get ULL on the board to make the game 7-0 in their favor. 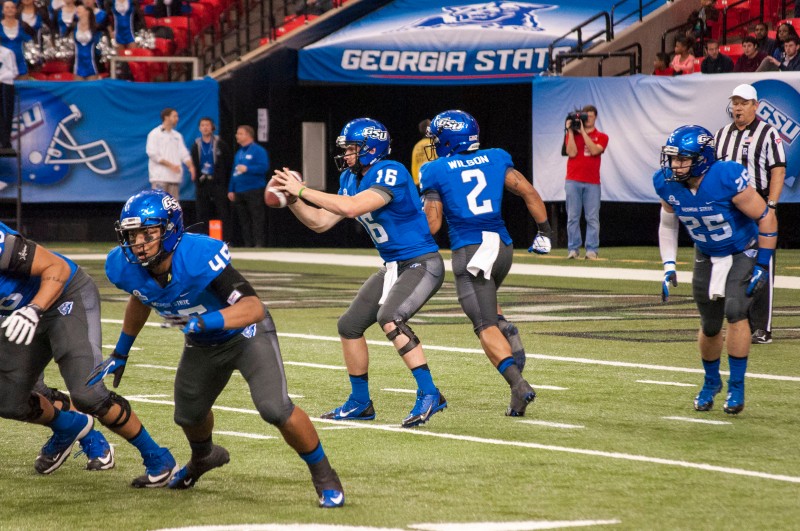 The Panthers were marching down the field in response to the Ragin’ Cajuns touchdown. Then on 3rd down inside the 10 yd line the Panthers fumbled and ULL recovered. Luckily they held the Cajuns to a punt and started their next drive on their own 10 yd line.

Quarterback Ben McLane was able to connect with Wide Receiver Danny Williams for the 3rd down conversion. Then after getting the first down connected with Paris Lee for another 1st down. Ben McLane was starting to find a rhythm as he continued to connect on a number of deep balls and screen passes. Just when Georgia State was beginning to make some headway McLane fumbled the ball and the Panthers were forced to punt. 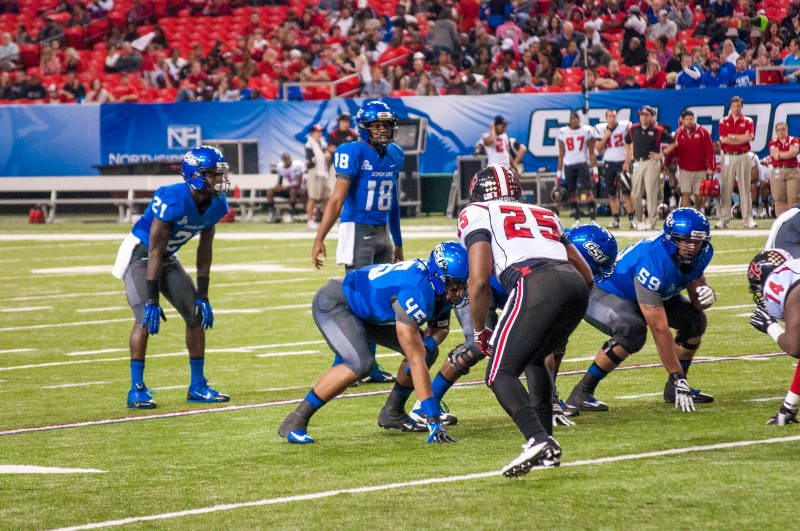 But in another crazy turn of events with 0:06 left in the 1st Quarter UL-Lafayette tried to run the ball to kill the clock and ended up fumbling the ball, which was recovered by Big Blue.To start the 2nd Quarter the Panthers made a switch at QB to Ronnie Bell. On the second play Travis Evans ran the ball in for a 10 yd touchdown. With the converted extra-point the score was even at 7. It took 10 solid plays, then 75 yds later UL-Lafayette took the lead back with a 1 yd touchdown run by Alonzo Harris.

To start the drive Ronnie Bell hit Keith Rucker across the middle for a gain of 22 yards. But just as quickly as the drive took off, the Panthers found themselves in a 3rd and 5 position. From the Shotgun, Ronnie Bell was able to find Parris Lee for a 9 yd completion. But ULL’s Trevence Patt came up with a huge interception at the 1 yd line.

So the next drive began at (Rajun’ Cajuns) their own 1 yd line. With their back against the wall, they handed off to Running Back Alonzo Harris for a gain of 5 yds to get them some breathing room. 11 plays 99 yds and 5:43 later a 50 yd touchdown pass was caught by Darryl Surgent. The Ragin’ Cajuns dominated offensively as they progressed downfield and continued to eat the clock. Then with 2:21 left in the 2nd Quarter, GSU began their drive at their own 25.

A few QB scrambles by Ronnie Bell kept their hopes alive of a score before the 1st half closed. So when GSU found themselves in another precarious position, Bell scrambled outside the pocket (avoiding 2 tackles) and threw a 42 yd touchdown to Tight End Keith Rucker. With the successful PAT the Panthers made the game 14-21. 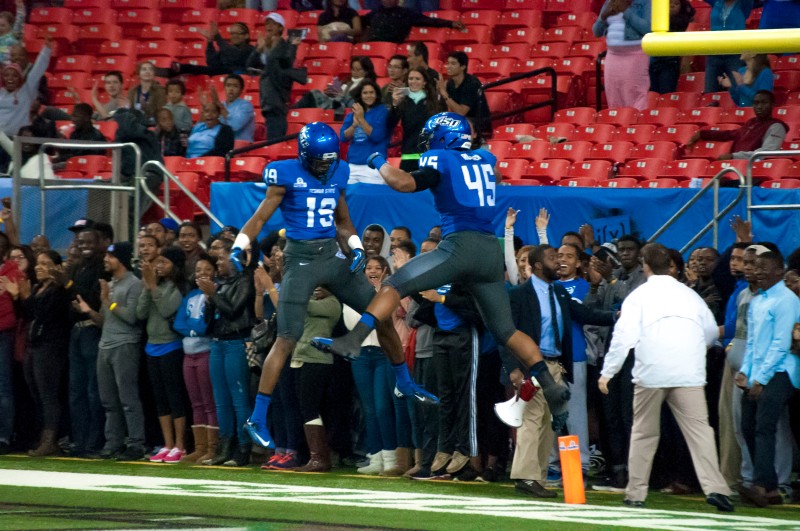 The Panthers got the ball to start the 2nd half. Bell has been doing a great job reading the defense, when he reads his receivers he finds some space and sprints for the first down. Unfortunately his luck ran out when a blitz play occurred and Bell was sacked for a loss which led to a punt by GSU.

After The Rajun’ Cajuns went through a quick 3 and out, the Panthers got to work pounding the ball on the ground, adding to their 1st half total of 106 (rushing). What happened next looked like a touchdown pass but was called back to the 1 yd line. Then a flag was thrown and it was determined there was an ineligible man downfield so they lost a down and brought the ball back outside the 20 yd line. A quick swing pass after that to WR Albert Wilson found put the Panthers in a position to tie the game with a successful PAT (which eventually happened). So with the 10 play 70 yd drive coming to a close the Panthers tied the game at 21. 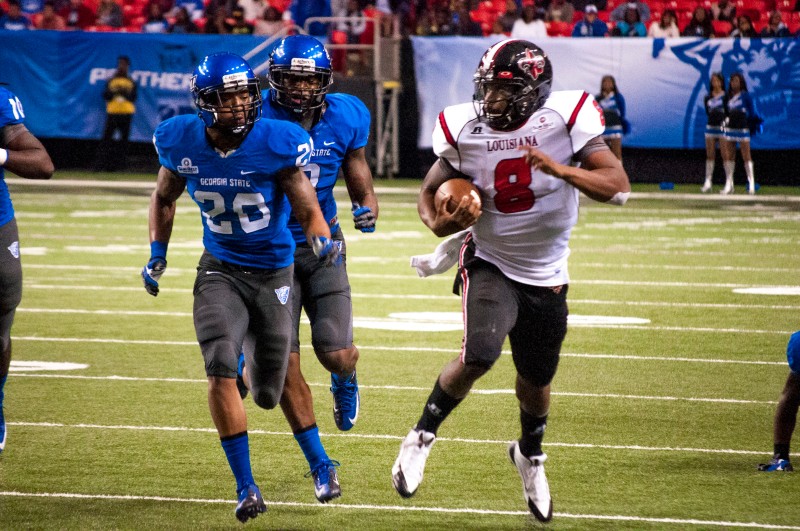 UL-Lafayette wasted no time responding when Terrance Broadway connected with Elijah McGuire for a 36 yd touchdown reception. With that score The Cajuns took back the lead, 28-21.

Coach Miles inserted a hint of trickery on GSU’s 4th down play. When the defense was lax and waiting to receive, the Punter actually ran wide-left and got the 1st down. But they very quickly found themselves in a 3rd and 14 situation. Bell scrambled for an 11 yd gain and GSU went for it again on 4th down, sadly falling short this time by just a yard (resulting in a turnover on downs). (Also Coach Miles saw something in a ULL play around the 10 min mark in the 4th quarter he was in the refs faces quite a few times).

So keep in mind the Panthers are still down by a touchdown, when on one play they accumulate 2 crucial penalties: Defensive pass interference and unsportsmanlike conduct. The pass interference call was iffy in my opinion but the unsportsmanlike conduct was absolutely unnecessary (picking up the referees yellow flag and throwing it again). So if that wasn’t bad enough, ANOTHER pass interference was called (another bad call) which put the ball on the 15 yd line for the Rajun’ Cajuns. With 8 minutes to go and their backs against the wall, the Panthers needed a crucial defensive stance.

Instead the Panthers received more controversy as an initial touchdown pass was called out-of-bounds. But after further review, the call was reversed and it was ruled a touchdown. So now with 7:58 left to play in the game, Big Blue was down 35-21. 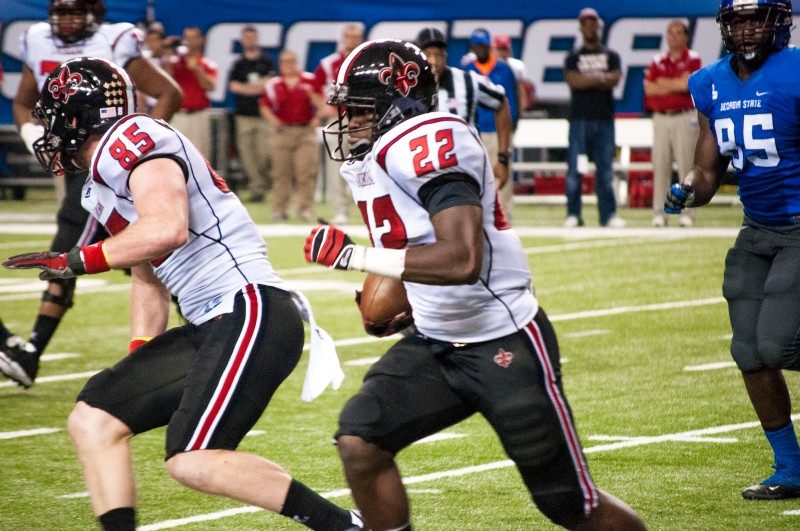 Bell had to take matters into his own hands the entire drive but unfortunately it wasn’t enough. On a 4th and 10 situation an incomplete pass ended their drive, turning the ball over on downs with 6:10 left to play. They later ended up missing a field goal to turn the ball over themselves. After GSU got the ball back Bell scrambled and was hit awkwardly, leading to a charging penalty on ULL’s Chris Hill (which results in that player being ineligible for the remainder of the game). With 3 straight completions from the hurry-up offense, the Panthers were looking good, moving down the field swiftly and accurately. But after a low block penalty was assessed their driving force came to a halt. With a slew of missed passes and a sack, the Panthers were looking at a 4th and 26. Sadly Bell was looking for Lynquez Blair in the back corner by the pylon and was overthrown out-of-bounds, putting the Panthers at 1 for 3 in 4th down conversions for the game. Once the Ragin’ Cajuns got the ball back they ran out the game clock, making the final score UL-Lafayette 35, Georgia State 21.

By Jon J.
Photography by X
The Peach Review®