It only took 14 years but we finally have a sequel. In Incredibles 2, Helen/Elastigirl (voice of Holly Hunter) is called on to lead a campaign to bring Supers back, while Bob/Mr. Incredible (voice of Craig T. Nelson) tries to manage life at home. Violet (voice of Sarah Vowell), Dash (voice of Huck Milner) and baby Jack-Jack push their dad’s patience to the brink while trying to adjust to life at home without mom. All the while, Jack-Jack’s behavior starts to change and Bob starts to suspect something is amiss.

The story picks up where we last saw our heroes fighting the Underminer in the city before the credits rolled in the first film. Supers are still illegal so they had to fight in secret. That’s kind of hard when you destroy half the city chasing the bad guy and end up losing him in the end. After the program suspends and Helen and Bob go back into hiding, a new investor appears who believes the world needs Supers. Winston Deavor (voice of Bob Odenkirk) recruits the husband and wife along with Lucius/Frozone (voice of Samuel L. Jackson). Being a telecommunications guru, Winston works together with his sister Evelyn Deavor (Catherine Keener) to determine that their best way to lead the Supers back to glory is to lead a campaign with Helen as the face of it. Everything from there gets funny. 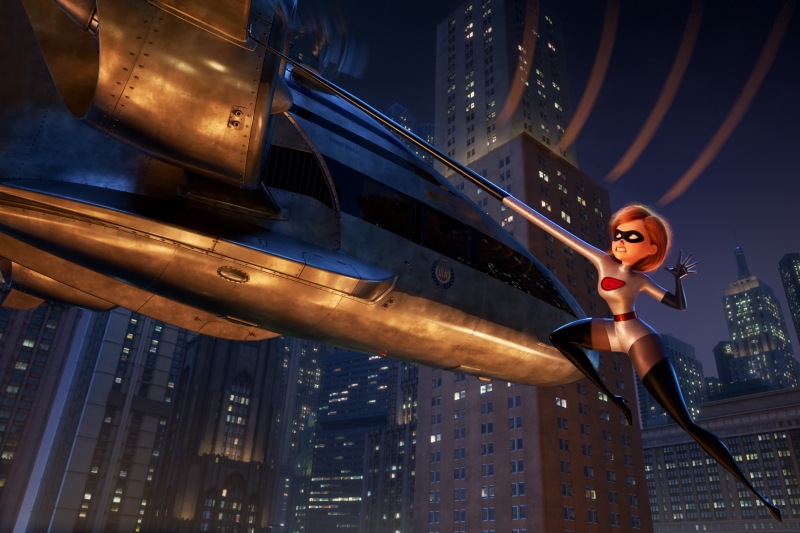 In the second edition, the kids get to showcase their skills and come up big time when trouble arises. The most exciting part of the film is finally finding out what Jack-Jack can do. He’s the only one in the family with multiple powers and it’s up to them to figure out how to manage them.

The story is pretty good, my only knack was the dialogue from Bob was kind of weak. There were more than a few times he tried to be funny and it just didn’t work for me. That happened once or twice with Dash too. It’s not enough to ruin the movie but it did stand out.

I give Incredibles 2 an 8 out of 10. Hardcore Disney fans have been waiting far too long for a sequel. I spoke to a young lady who’s in her third year of college who saw the original when she was seven (just to show how long 14 years is). Before the film, you’ll get to see a Pixar short called Bao, about an aging Chinese woman who’s going through empty nest syndrome. It was unexpected but it turned out to be a nice story.