Killer Inside: The Mind of Aaron Hernandez is the latest docuseries to arrive on Netflix and I must say, it does not disappoint.

For those who are unfamiliar with the name, Aaron Hernandez was famous for playing tight end for the New England Patriots. Sadly, his namesake went from famous to infamous after the discovery of his double life. The seemingly mild-mannered young kid from Bristol, Connecticut was now responsible for the death of his brother-in-law.

This three-part documentary series featuring exclusive courtroom footage, Hernandez’s phone calls from prison, and interviews with those who knew Hernandez and Lloyd, builds plenty of suspense. It’s a story where, after you learn about everything he’s experienced, you start to feel for the guy. 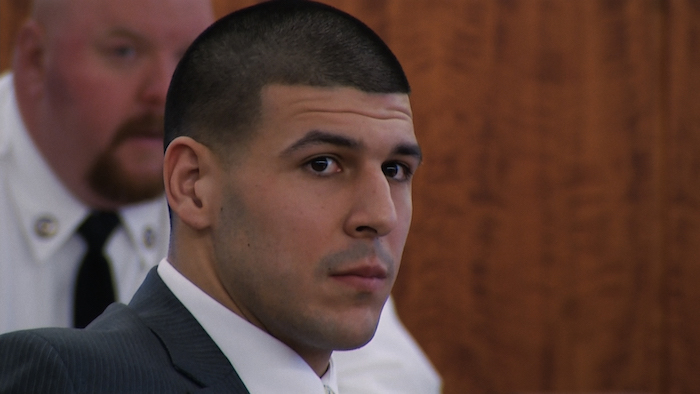 As a teenager, he’s immediately spotted as a standout kid, oozing talent on the football field. He was one of those kids who was kept on the straight-and-narrow by his father. He ran a tight ship but he was known and well-loved by his family and the community. So understandably, after his passing, Aaron started acting out. His family didn’t make things any better. Barely a teenager and still reeling over his father’s death, Aaron’s own mother hooks up with her sister’s husband. So think about it, your father dies, his death is still fresh (not even a year goes by) and soon as you come home from a rough day, you see your mother with a man in the house that’s not your father. That drama-filled scenario would affect anyone.

For young people, there’s a slew of lessons to be learned. Family decisions can leave a negative impact on you and your mental health, choose your friends wisely, watch who you hang around, never try to be something you’re not, protect your dream at all costs, are just a few. With a fiancée and daughter to fight for, we see a man getting attacked from all sides without a lot of help in his corner.

This is a spectacular docuseries that focuses on any and all possibilities as to how and why this atrocity happened. The case examines mental health, sexuality, lies, CTE, law, and greed. We’ve seen some crazy things happen with athletes once they retire, but the mess Hernandez found himself in took place during his career, in the middle of an NFL season. Imagine signing a $40 million contract extension knowing you killed someone in secret a week before.

I give Killer Inside: The Mind of Aaron Hernandez a 9.5 out of 10. With exclusive courtroom footage, gripping testimony, and featured interviews from family and friends, everyone will have some opinions to share by this weekend.