“We have to turn the page as quickly as possible and focus on Chicago,” defender Greg Garza said. “Start looking at what they’re good at and hopefully we can use the same game we did against them at the beginning of the season.”

Garza gave Atlanta the lead in the 7th minute, marking the 11th time Atlanta United has scored first this season (top in MLS). The play started from the back with Carlos Carmona firing a long-ball for Garza, who quickly played on to Asad. After making a run through the midfield, Asad crossed for Gressel, who immediately sent a low cross past the goalkeeper to Garza to blast it home. 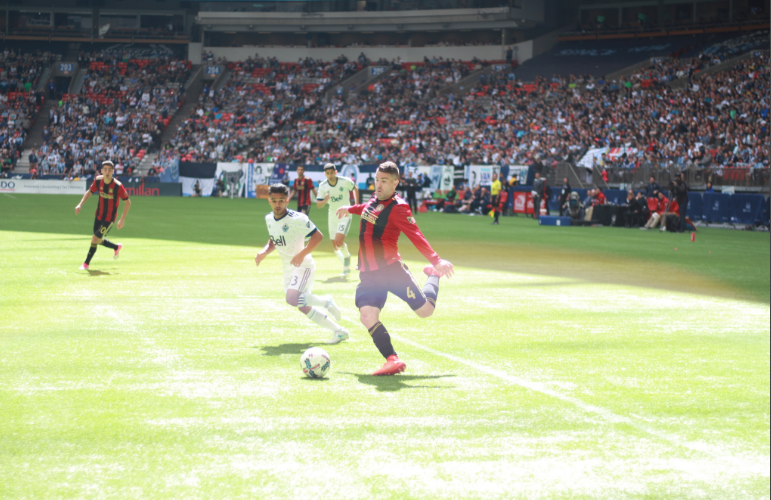 Vancouver came back with a pair of first-half goals, both from center back Kendall Waston. The first came on a broken play after Atlanta United temporarily cleared a corner kick in the 31′. Vancouver’s Andrew Jacobson gathered a loose ball and centered a pass for Waston, who was alone inside of the penalty area and was able to score. Later in the 44th minute, off a corner kick, Waston headed home a ball from Cristian Techera to take the lead.

Vancouver added a third in the 68′ off another corner. Alec Kann initially saved a headed attempt from Waston, but Montero was alone in front to gather the rebound and score. The killer in this game for United was set piece defending.

“Waston is a beast in the air on the headers, we try to have a guy in the zone marking him but he’s very good,” said captain Michael Parkhurst. “Obviously, we paid the price, we gave up too many set pieces to him, too many corners, too many opportunities to them. We knew that was a strength for them and a weakness for us and we got punished today.”

Our man in form Miguel Almirón had a tough time getting involved in the match as he was being marked most of the match. “We saw that they had three holding midfielders in the center of the pitch: Jacobson, Laba, and Tchani.  We had to get through that first defensive wall,” said manager Tata Martino.

Atlanta United returns to action on Saturday, June 10 against Chicago Fire. Kickoff is scheduled for 4:00 p.m. from Toyota Park and will be televised nationally on UniMas.