Sup you guys?! This is TBZ and I’m telling you right now, Momocon 2018 will go down in the books. Momocon has video games, table games, panels, anime, comic books, and everything about cosplay. This year’s annual pilgrimage to the Georgia World Congress Center was filled with laughs, new friends, great interviews, and tons of great cosplayers.

A cosplayer is someone who dresses up as their favorite character from TV, anime, or even movies. I actually cosplayed two characters this weekend: Thelma (a gender bender) from Scooby-Doo and the one people know me for most, Perfect Cell from Dragon Ball Z. I like the fun that goes into cosplay. To me, it helped me find my peace and relax my brain. Let’s say you do a puzzle and it has over 100 pieces to it. Once you sit down after it’s finished, you look at it like it’s a masterpiece. That’s how I see building my cosplay. While sewing isn’t my thing, I’m more of an armor type of person. I like to take craft foam and EVA foam and work from there (there are endless possibilities). At Momocon, there were tons of great cosplay. Kid Goku Black, Adult Goku Black, Bulma, Android 18, Trunks, Zero Suit Samus, Sailor Scouts, Pokémon, and even a Hugo x Poison couple (that was really cool). Most of those were Dragon Ball cosplays but another popular theme was My Hero Academia since it was the most popular anime at that time. Overwatch was extremely popular so there were a lot of those too. 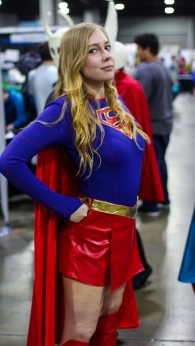 Another great thing about the kickoff to con season is the diverse list of guests. With actors from Voltron to The Last of Us to Unchartered, there truly was no limit to the talent that Momocon has grown to attract. But naturally, as totally embody Perfect Cell, when I heard the bulk of the Dragon Ball Z voice actors were coming I had to be a part of it. Kyle Hebert voices Teen Gohan in the series and Chris Sabat voices Vegeta, the Prince of all Saiyans. Watch the whole interview because he’s an awesome guy… But right here, let’s see if Gohan could beat Perfect Cell (because I just have to know).

The gaming was fun too. Me being Perfect Cell, I had to play Dragon Ball Fighter Z, that’s my favorite game. The con gave me more time to practice so I can enter a tournament eventually and enter the tournament… as myself. There’s another game I got to play called, “Ribbiting Saga.” I cannot wait until that comes to console! It’s like a Super Nintendo feel when playing that game. Like a “Link to the Past” or “Mario RPG” or “Chrono-Trigger” feel to it (cue all the nostalgia). Whichever console they release it on I’m going to get it and stream it (follow me on Twitch).

“Neon Ninja” was a great game I got to play. It was an indie game just like “Ribbiting Saga” and I made it pretty far. The indie row was a great place to play new video games by up-and-coming game developers. There were lots of fun puzzle games like SiNKR, a minimalist puzzle game that won the Indie Showcase Award and I even got to play my first VR game too! 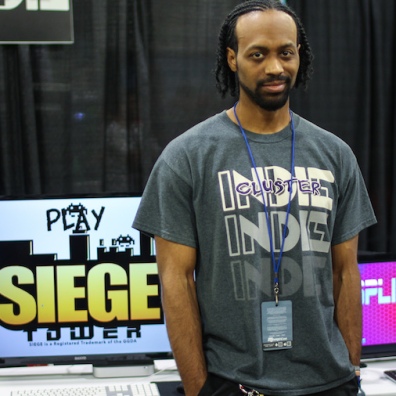 Momocon is the start of con season, basically, Spring going into Summer. Momocon started off as a free con at Georgia Tech. You’d just go in, play some video games, you could buy some stuff, and it was just a good, free time. Then all of a sudden, Momocon blew up, out of nowhere. I went downtown one day and saw Momocon was at a hotel. Then as I started going more it started to be a paid con, but it’s definitely worth it. It doesn’t just kickoff con season, they’ve partnered with Dragon Con, our biggest convention here in Atlanta. Momo is one of those where you don’t have to come dressed up so it’s a good introductory con for the noobs.

Momocon is definitely a favorite because of how easy it is to meet people. I always make new friends and catch up with old ones. On a scale of 1-10, I give Momocon a 15. Major props to the staff too because they’re not just helpful but lots of fun. Be sure to follow us on social media and also follow me on Twitch.